Back to 'Tea Porcelain Stories' > Blog

The Evolution Of British Tea-Wares

Tea arrived in Britain in the mid 17th century via the ships of the East India company – and with it the need for expensive, new, unfamiliar equipment in the form of delicate porcelain teapots and tea bowls from China.  Tea was exceptionally expensive and highly taxed and was drunk as a very formal social refreshment. Chinese tea bowls were therefore very small and when containing  boiling water would get very hot.  To protect their fine highly polished furniture the upper classes paired the tea bowls with sauce bowls, from this derived the term ‘saucer’.

From this moment a whole new range of products evolved associated with this highly fashionable commodity that quickly became central to British culture and society: tea caddies, spoons, tea tables and trays as well as the porcelain itself became the focal point for designers and makers across the country.

For centuries potters across Europe had struggled to emulate the fine porcelains from China, our own earthenwares were completely unsuitable for tea drinking – the race was on.  Firstly we developed a soft paste porcelain in about 1745 at Chelsea, London, trying to emulate fine Chinese hard paste porcelain without having the essential natural ingredients.  Within a few years potteries had sprung up at nearby Bow, Vauxhall, and Limehouse as well as further North in Worcester, Caughley, Derby and Liverpool.   In 1760 an apothecary called William Cockworthy found the two essential ingredients for making porcelain – Kaolin (china clay) and petunste (china stone) in Cornwall.  In Plymouth he set up his factory and the experiments to develop an equivalent to Chinese hardpaste porcelain began.

The key to the development of British porcelain was the invention of bone china.  Thomas Frye, who added bone ash to his soft paste porcelain at his pottery in Bow in 1748, undertook the first experiments.  But it was Josiah Spode  in Stoke-on-Trent who perfected the ‘recipe’ c 1790.  Traditionally British bone china was made from two parts animal bone-ash, one part china clay (kaolin) and one part china stone (feldspars). It is strong, glassy, transparent, and reflective and can be very thinly potted.

In 1791 Britain was involved in a European war and the East India Company decided to cease imports of Chinese porcelain.  Tax on tea was reduced and tax on silver was imposed, the demand for British tea wares was immense and expansion was swift, from 27 porcelain factories in the period 1780-90 to 106 by 1810-20.

Early English teacup designs and shapes were often based on Chinese and Japanese patterns, attempting to emulate the porcelains of the orient in both pattern and style as well as body.   Some potters even went so far as to use pudeseo Chinese symbols to mark their work such as Worcester from c 1770 and Miles Mason from c 1800. The first form of tea vessel that we produced was the Chinese cup (bowl) shape, often found in cream ware, china glaze and early pearlware.   Examples of this shape continued until c 1820.  Early soft paste porcelain had to be glazed after the painted or printed decoration was applied.  The glaze was made using the metallic oxide of cobalt which was black, turning blue after firing.  It was quite a skill to judge how the tones and shading would look on the final finished fired article.  From 1780 simple forms of cups began to evolve eg the use of vertical fluting appears, this then evolved into wrythen or twisted fluting.

Porcelain was so expensive that tea services were sold in tea trios: one saucer to two cups, one for your tea and one for your coffee or chocolate.  A Georgian tea service would consist of a teapot, sucrier (for sugar), jug, spoon tray, slop bowl, two large cake plates, and the saucers and cups.  The slop bowl was for the tea leaves and residue after each round of tea.

British porcelain tea ware decoration reached an exceptional level in the early decades of the nineteenth century.  Spode, Minton, Coalport, H&R Daniel, Wedgwood, Davenpot, Chamberlains and Derby produced some extraordinarily beautiful cups and saucers of the highest quality for their wealthy and titled patrons.  An array of rich ground colours were decorated with complex enameled designs: flowers, fruit and birds, and were richly gilded.  Cups were often exquisitely moulded, the decoration used to highlight the moulded patterns for even greater effect.

During the late 1820’s and early 1830’s it became common place to elaborately decorate the saucer and the inside of the cup, your guests would marvel at the wondrous decoration emerging as they sipped their tea away.  The levels of skill at this time amongst the painters and gilders were truly unrivalled.

Porcelain distributors discouraged the use of pottery identification marks during this era, pieces were marked with a small fraction (pattern) number which can be found in different hands and colours and which refer to pottery design pattern books.  This practice dates from the early 1780’s, a reference was made to the Derby pattern 69 in correspondence written in 1774.  Often only important pieces in a service such as the teapot, milk jug and one or two teacups were marked.  Some potteries did use a very distinctive marking system from a very early period eg First period Worcester porcelain is marked with a small blue crescent shaped moon from about 1793. 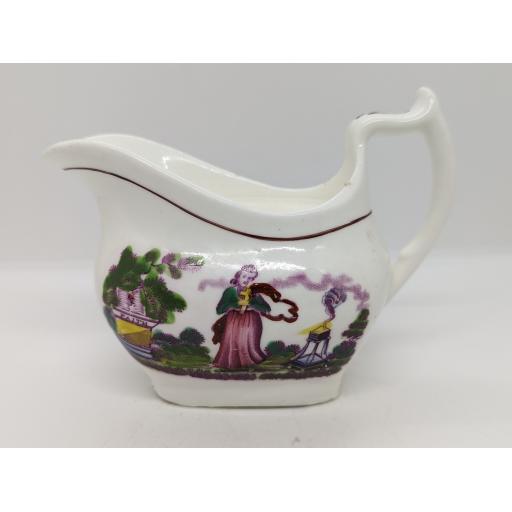